Modernist architecture may seem brutal, simplistic, and crude at times. But its different schools of thought have produced plenty of masterpieces that are regarded as architectural classics today. Take a trip around the world with our tunning examples of modernist architecture that gave way to such incredible contemporary designs like The Shard in London or The Gerkin. 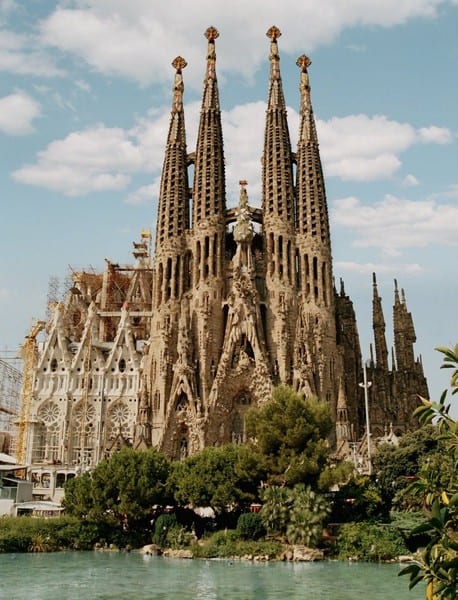 Gaudí spent his entire career in Barcelona, where he built all of his projects, the most famous of which is the 1883 cathedral known as La Sagrada Familia, still under construction today. His style was an ornate mix of Baroque, Gothic, Moorish and Victorian elements that often featured ornamental tile-work, and drew upon forms found in nature. Gaudí’s work would go on to have a tremendous impact on subsequent generations of modernists.

A Wisconsin native, Wright revolutionize 20th-century architect, and his midwestern upbringing played a crucial role in shaping his sensibility. Inspired by the low-lying building that dotted the American plains, Wright created the Prairie House style as a reaction the prevailing Victorian aesthetic, which emphasized dark decor, and busy embellishments both inside and out. 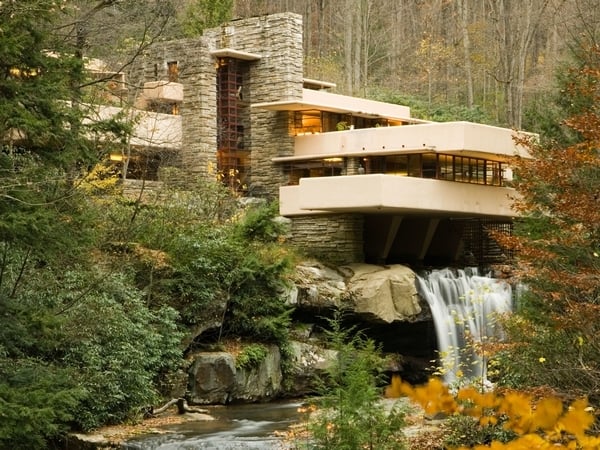 In its stead, Wright employed clean geometries with an emphasis on horizontal planes. His most famous building, Falling Water (a residence in Bear Run, PA, designed for Pittsburg department store magnate, Edgar Kaufmann in 1935) features stacked rectangular balconies that seem to float over the natural waterfall incorporated into the house. Later in his career, Wright would embrace curvilinear elements, a shift that found its most celebrated expression in the Solomon R. Guggenheim Museum.

Famously holding to the proposition that “less is more,” German architect Mies Van der Rohe stripped architecture to elemental geometric forms, pointing the way to Minimalism. He banished all traces of ornamentation, using the innate qualities of materials such as steel and plate glass to define the look of his buildings. 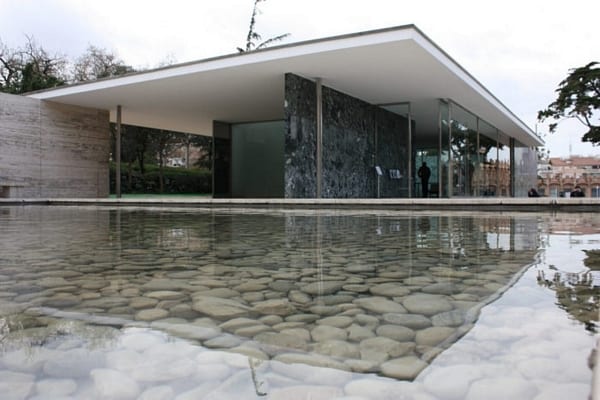 His designs emphasized rationalism and efficiency as the route to beauty, an approached exemplified by The Barcelona Pavilion, built to house Germany’s exhibit for the 1929 International Exposition in Barcelona. In it, you can see that while Mies (the name by which he’s best known) abjured decorative details, he wasn’t adverse opulence, as the liberal use of marble, red onyx and travertine in the structure attests. The resulting masterpiece is only matched, perhaps, by Mies’s Seagram’s tower in New York.

Johnson’ role as the founding director of MoMA’s Department of Architect had an enormous impact on the field, making him a gatekeeper who helped to shape architectural trends from 1935 onward. His was also a designer in his own right, though it’s fair to say that he was more of a refiner of other people’s ideas than he was an innovator. 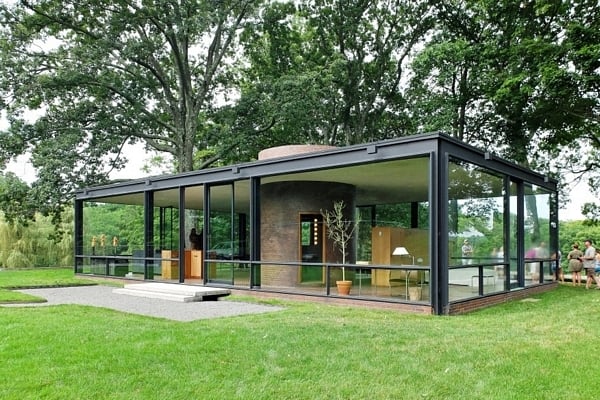 Nonetheless, his work achieved iconic status in a number of cases, most notably in the residence he built for himself in 1949. The house is a distillation of Mies Van der Rohe’s approach, and in fact, Johnson himself noted that it was “more Mies than Mies.” A transparent box set among exquisitely landscaped grounds, The Glass House dissolves the boundaries between inside and out, public and private. It’s expansive use of plate glass undoubtedly inspired much of the architect for today’s high-rise luxury developments.

During the postwar era, the Bauhaus’s straight-line philosophy evolved into the International Style, the go-to aesthetic for new business headquarters and government office buildings around the world. In essence, the modernist ideal of simplicity became a form of corporate conformity, and it is against this backdrop that Eero Saarinen’s mid-century designs served as a welcome corrective. 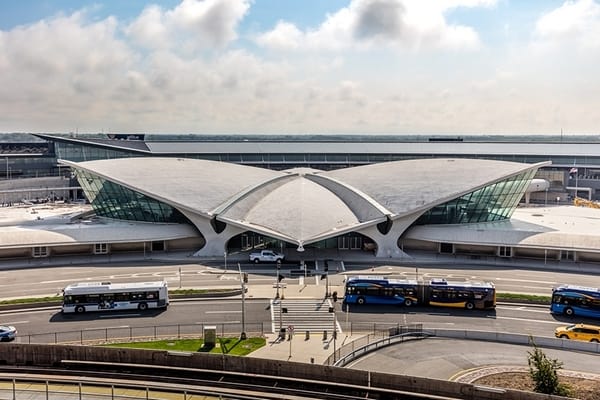 In contrast to the standardized box adopted by the International Style, Saarinen employed swooping curves that gave his architecture a sense of soaring transcendence—most especially in his 1962 JFK terminal for the now-defunct TWA airlines. It’s gull-wing roof and ecstatic interior are still thrilling, but it’s sense of architecture taking flight is a Saarinen trademark, evident in other projects such as his 1947 design for St. Louis’s magisterial Gateway Arch.

When the Pompidou Center first opened in 1977, it was consider the epitome of a trend at the time known variously as High Tech and Structural Expressionism. 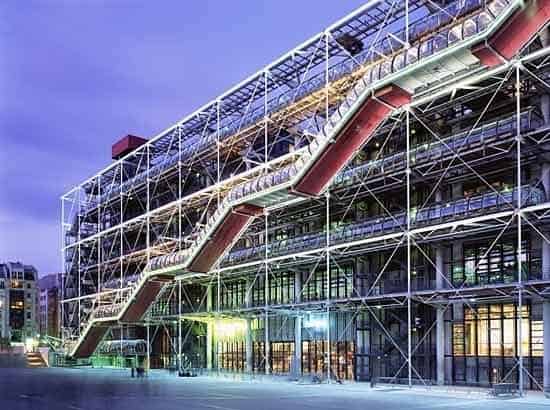 British architect Richard Rogers was a leading proponent of the style. This building, designed as Paris’s central institution for Modern and contemporary art, suggests a structure turning inside out, with its heating and plumbing systems worn as the facade—which also features a glass-enclosed outdoor escalator climbing the height of the building. Rogers took a similar approach for another of his iconic buildings, the headquarters for Lloyd’s of Lon

This West Coast architect is undoubtedly the most famous in the world right now, thanks to his 1997 design for the Guggenheim Museum branch in Bilbao, Spain.

Though Gehry was already well-established in his field as the auteur billowing forms that seem to defy gravity and the logic of conventional construction methods, The Guggenheim Bilbao remains the finest example of a style he’s applied to innumerable commissions, like Disney Hall in Los Angeles and MIT’s Stata Center in Cambridge MA. 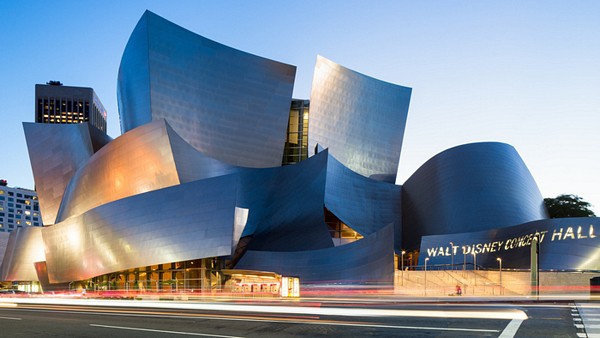 Clad in titanium, The Guggenheim Bilbao suggests a large ship tied up along the Nervión River. The building is also credited with reviving the fortunes of its host city, the largest in the Basque Country. 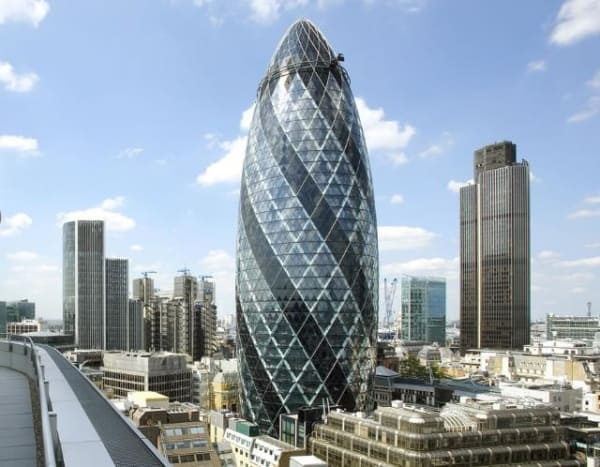 The latter’s tessellated pattern of triangular forms must have made an impression on the young Foster since his most famous buildings feature similar surface treatments for their facades. Exhibit A: 30 St Mary Axe in London, aka The Gerkin, a commercial skyscraper in London’s financial district that opened in 2004. Its pickle-like form tapering to a point has become an international icon, as synonymous with London as the Eiffel tower is with Paris.

Unlike other architects on this list, Italian architect Renzo Piano isn’t recognized for having a singular style. Instead, his building have been eclectic, ranging from the Neo-Brutalism of his design for the Whitney Museum’s home in the Meatpacking District, to the elegant, light-filled Menil Collection in Houston Texas, which resembles an overgrown version of a mid-century house by West Coast modernist, Richard Neutra. 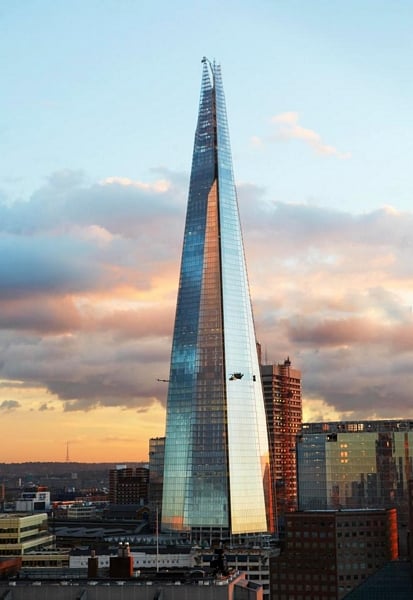 However, his projects often share a certain industrial or technological look (he cut his teeth, assisting Richard Rogers in the design of the Pompidou Center). The Shard in London is his largest building to date, a sharply tapering 95-storey skyscraper made of glass and steel that has become his most recognized creation.

The work of this Spanish architect has been described as Neofuturist, although sci-fi baroque might be closer to describing it. His buildings often resemble the ribcages of extinct robotic dinosaurs, if such things existed. His projects definitely attracted worldwide attention—and garnered a reputation for massive cost overruns. 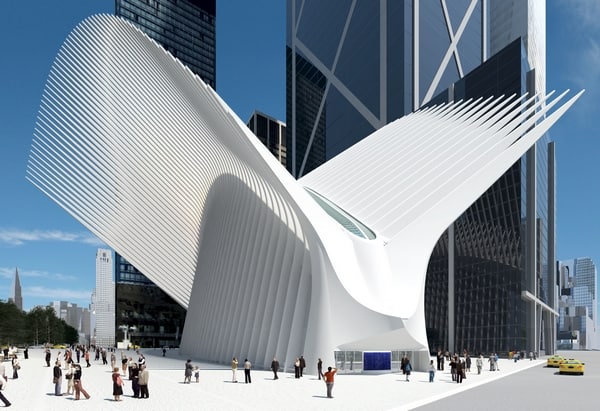 Nonetheless there’s no denying that Calatrava is one of the most distinctive architects working today, as his best known creation—the Transit Hub for the World Trade Center—attests. Finally open after years of delays and exploding expenditures, the Transit Hub is a vision in white, its interior dominated by a glass occulus allowing daylight to filter into its main hall. As it happens, Calatrava has another building on the WTC, a Greek Orthodox chapel that replaces one destroyed during the 9-11 attacks. It, too, is clad in white while its form is based on famed Hagia Sofia in Istanbul. 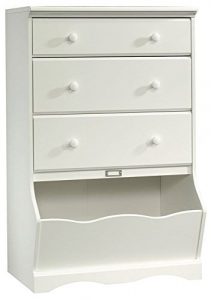