Everybody should own a Swiss Army Knife. Having one in your pocket will avert all sorts of frustrations and minor emergencies. Whether you need to open a bottle of wine, file your nails, or stab an aggressive animal, the Swiss Army Knife is your friend. Luckily, there’s a large  variety of Swiss Army Knives on the market today — whatever your needs, you can find a knife. Unluckily, that variety can make the selection process confusing. So we’ve created this guide to help sort you out.

The original Swiss Army Knife is made by Victorinox, and their brand is basically synonymous with the tool — and for a good reason. Victorinox makes a high-quality product, they’re famously faithful to their lifetime warranties, and they’re simply the original. Also, one of their knives is part of the Museum of Modern Art’s permanent collection, which is a great endorsement. Accordingly, many of the knives below will be of the Victorinox brand, but we’ve also included a few alternatives that are just as worthy. 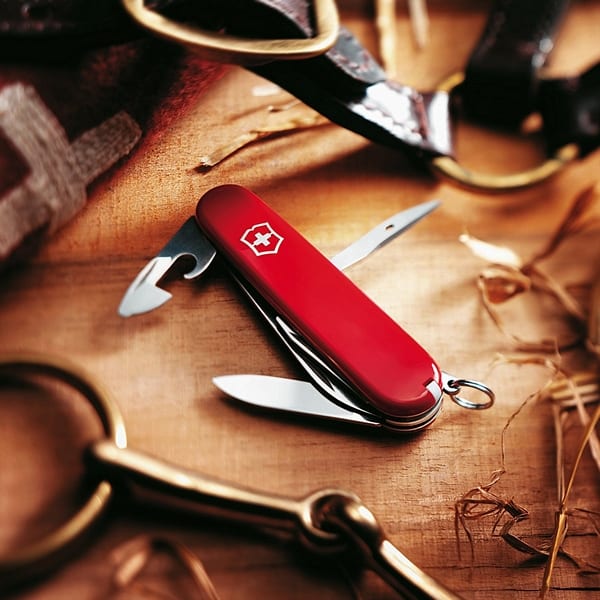 The Tinker is a halfway point between the stripped-down classic models and the feature-heavy SwissChamp. And it’s a perfect compromise. Its toolset doesn’t disappoint, but it’s still sleek and lightweight. Basically, you won’t feel like a dork if you carry it around every day, but you’ll still be able to take stuff apart. 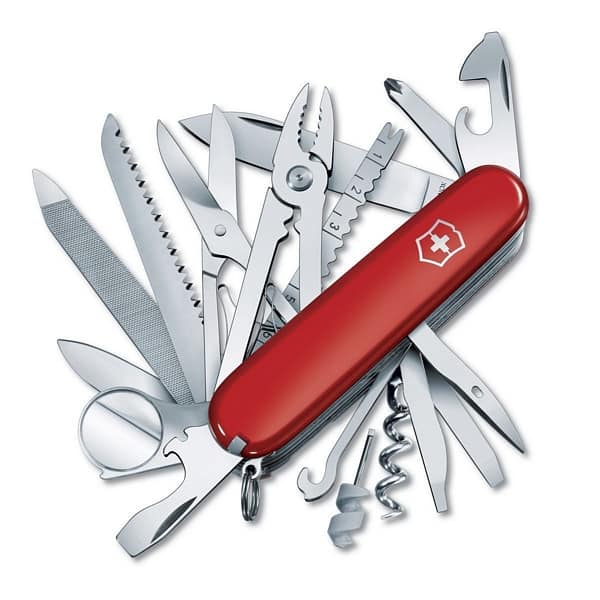 The SwissChamp is the most practical of Victorinox’s deluxe options. It has just about everything you need, and some stuff you don’t need, and yet, miraculously, is still pocket-sized (that is, if you have generous pockets). With this knife in hand, you can saw metal, punch a new hole in your belt, and even read fine print with the included magnifying glass. 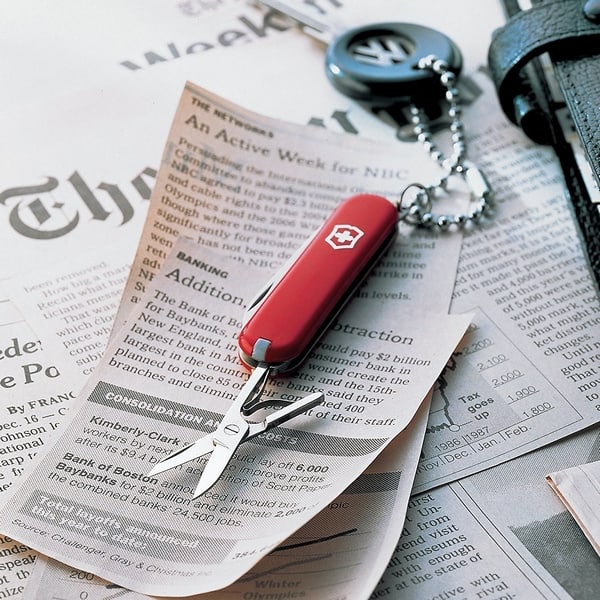 As the name implies, this is the bare bones, old-school model, making them the Best Value option. You definitely won’t find a more useful tool on earth for $15. While they lack the extensive functionality of more upscale knives, the lack of a sewing awl or a fish scaler probably won’t bother most people. Also, these come in lots of colors and designs. So if you ever wanted to rock some zebra stripes or a Star of David while accomplishing manual tasks, this is the one for you. 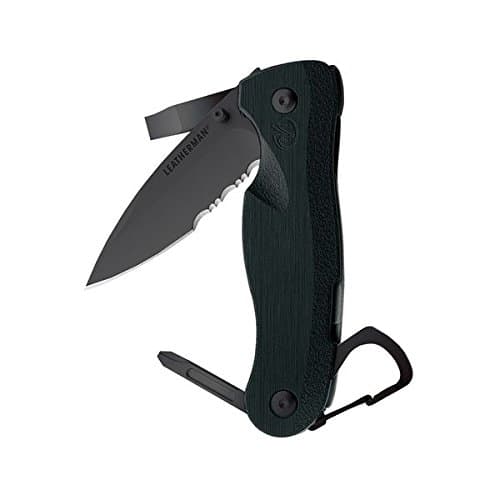 Chech this on Amazon!

This isn’t so much a Swiss Army Knife as a folding knife with a couple of screwdrivers. But if all you need to do is slice stuff open or take it apart, this is the tool for you. The blade is very high-quality, and, well, it just looks cool. 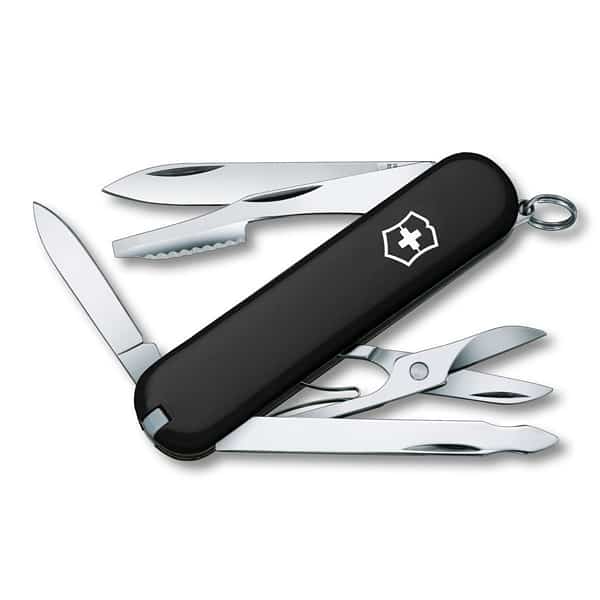 Swiss Army Knives aren’t just for woodsmen, as evidenced by this knife, which is specifically designed for the white-collar professional. Instead of screwdrivers or reamers, this model comes with a nail cleaner, tweezers, and an orange peeler. So if you just need to remove unsightly hairs and open a letter occasionally, this is our recommendation.

Wenger was a competitor brand of Victorinox until the two merged and the Wenger line went out of production. You can still find some of their knives kicking around, though, and the Evo S10 has a feature that most Victorinox knives lack: a locking blade. This makes it handy for finicky knife stuff, like whittling. Very similar to Victorinox in terms of form factor and quality. 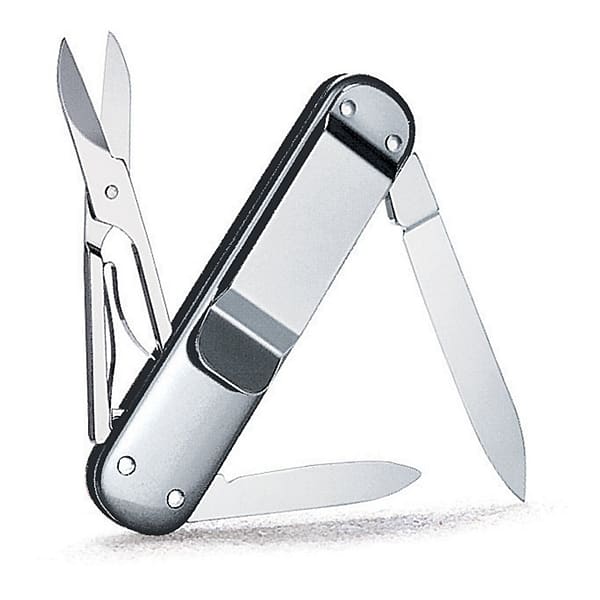 If you don’t like wallets, and you’d rather keep your money in the handle of a knife, go no further. This is a minimal Victorinox model combined with a very sturdy, attractive money clip. You’ll look pretty cool dispensing crisp twenties from a sharp implement. 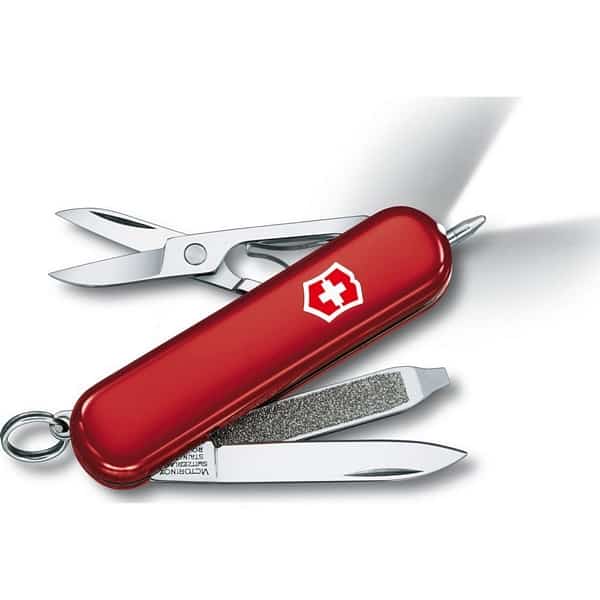 This is a slight tweak of the original palette of functions. Instead of having a toothpick and tweezers built into the handle, you get an LED flashlight and a ballpoint pen. For many, these will be more useful than the default features. Being able to remove unsightly hairs is nice, but the ability to sign a check is perhaps more important. 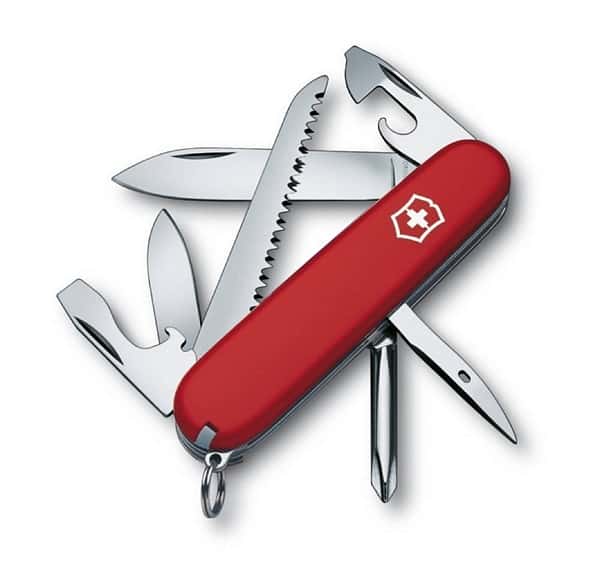 The Hiker is another mid-range model, but instead of being geared towards the city-dweller, like the Tinker, this one is best for all the hikers and campers out there, given its inclusion of a sizeable wood saw. 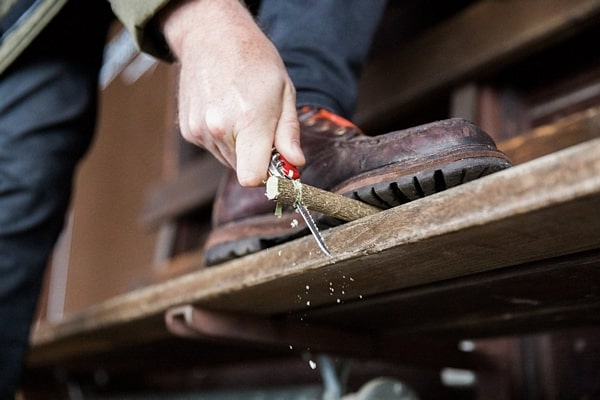 This is Victorinox’s offering for those who are interested in bagging some wild game. As such, it’s more slicing-and-dicing focused, rather than construction-focused, which means that it doesn’t have a dedicated Philips-head screwdriver or pliers. 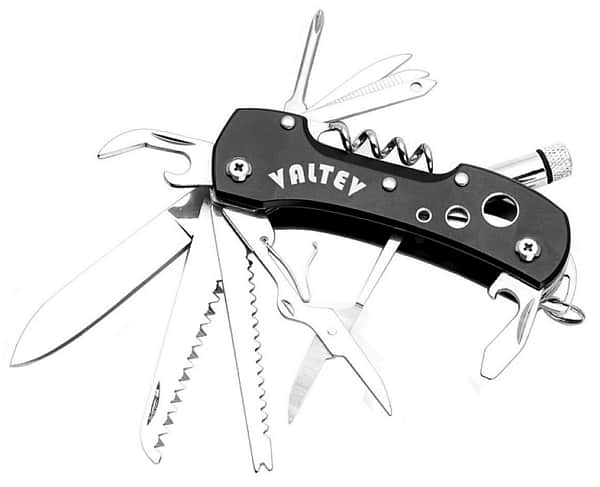 The Valtev is basically a budget alternative to the SwissChamp, with many of the same features. Now, while there’s absolutely no question that the Victorinox knives are higher-quality, the Valtev is no slouch. While it might not survive a nuclear apocalypse, the price is unbeatable, and it’ll handily serve the needs of most users. Makes a great gift if you’ve got a crafty nephew in your life. 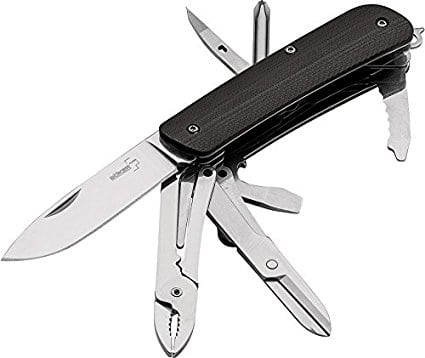 This Boker is the only real competition for the Victorinox models. It’s a little bigger, thicker, and heavier, and it doesn’t have that iconic design. But it has a lovely grippy handle, and its knife is impressively sharp. As well, it comes with a glass breaker tip, which might come in handy in certain sticky situations. If you’ve tried Victorinox knives and still aren’t satisfied, go for a Boker. 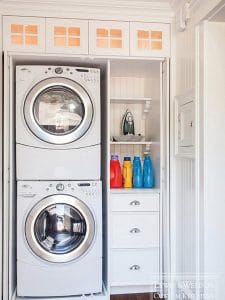 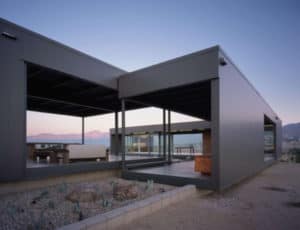