As a pocket knife enthusiast I spend most of my time collecting, reviewing and of course using folding knives from today’s major brands like Spyderco, Benchmade, Kershaw, Buck and CRKT.  Still, there comes a time when you need more than a one or two blade folder and since I was introduced to the world of multitools in the late 80’s I’ve been a fan ever since.  Nothing comes close to a quality multitool when you need sheer sturdiness and practicality in an EDC form factor.

In this article I will show you the absolute ten best multitools on the market today.  You may be surprised to see that they’re ALL made by Leatherman – but you shouldn’t be.  Leatherman is the undisputed king of multitools and simply unmatched in my opinion.  Since Tim Leatherman built his first multitool and created Leatherman Tools in 1983, the Leatherman company has continued to innovate and demonstrate unrivaled quality.  Their 25-year no-questions-asked warranty says it all.  Take it from me, all you need is Leatherman.

So, without further ado, here’s my list of the top 10 multitools. 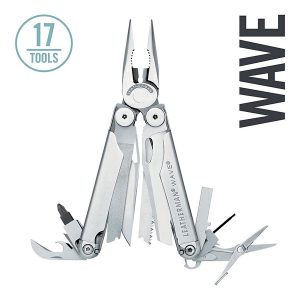 The vast majority of consumers should look no further than the Leatherman Wave.  The Wave is now a full-sized multitool with 17 tools crammed into a superbly designed body that is small enough to carry.  It includes 2 pliers, wire cutters, two 420HC knives (one of them is even serrated), a saw, scissors, a wood/metal file, a diamond-coated file, 2 drivers, a bottle opener, 2 double-ended bits, and more.

The Wave is constructed of 100% stainless steel, and includes a lanyard attachment and a leather/nylon sheath. This multitool weighs in at 8.5 ounces, and measures 4” long and 2” thick. You can get your Wave in plain stainless steel or with a cool looking black oxide finish.

There’s a reason this has been Leatherman’s most popular model for over a decade – the design is ingenious, the quality is outstanding and the value for money is unrivalled.  Don’t get me wrong, Leatherman has higher-end models for those with money to burn but the balance between features, quality and cost is just about perfect with the Wave.  If you’re unsure what to buy, get this – you won’t regret it. 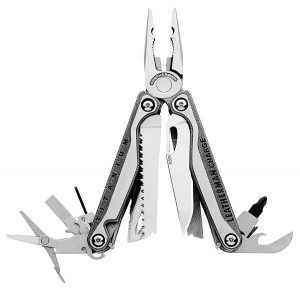 The Charge TTi is a feature-rich multitool in a light, 8.2-ounce package. It includes a high quality S30V steel knife and a 420HC serrated knife with cutting hook, as well as both a small and a large bit driver with a small selection of bits. There’s 19 tools in all.  You also get a medium screwdriver, two files, scissors, a saw, and a can/bottle opener.

Next up, the needlenose pliers also serve as a regular pliers, wire cutter, and hard-wire cutter. There is also a wire stripper and a crimping tool. The Charge TTi includes a replaceable pocket clip and quick-release lanyard ring, and features premium sculpted titanium handle scales for great comfort.

Basically, the Charge TTi has a better blade, comes with a better sheath and a bunch of bits and is overall a little lighter than the Wave.  It has a couple of extra tools and the titanium handle is superior to the stainless steel. 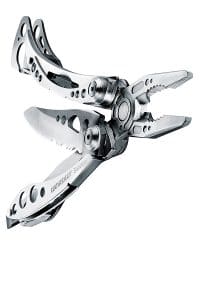 At number three is the Leatherman Skeletool, a lightweight 5 ounce multitool with 7 tools in a 4”, mean-looking package.  This is Leatherman’s most recent model and is packed with needlenose pliers, regular pliers, hard-wire cutters, and regular cutters. The combination knife is partially serrated and made of 420HC stainless steel. The Skeletool also includes a carabiner/bottle opener and a large bit driver. Add on Leatherman’s optional 21 double-ended bit kit, and you extend the possibilities tremendously.

The body of the Skeletool is manufactured of stainless steel, with 6061-T6 aluminum handle scales. The light 5 ounce weight makes this the lightest full-size multitool on the market. This multitool has a belt clip but unfortunately, does not come with a standard sheath, so you’ll have to buy one as an optional accessory. 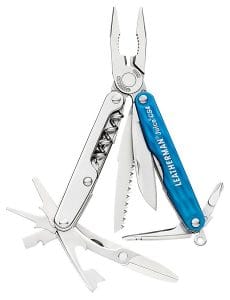 Moving into a smaller, but still full-sized, Leatherman tool, we come to the Juice CS4. The Juice CS4 is designed for people with smaller hands, and is only 3.25” long when closed.  You can essential think of the Juice CS4 as a mini-Wave with a few things left out to get it into a smaller package.  Don’t let its small stature fool you, though, because it still includes 15 different tools, including needlenose and regular pliers, hard-wire and wire cutters, and a 420HC knife.

You also get a saw, scissors, an awl, a bottle/can opener, and even a corkscrew. Rounding out the selection, there are four different screwdrivers, from extra-small to medium/large and Phillips-head. The 6061-T6 hard-anodized aluminum handles make the multitool strong but light, and the handle also includes Type II blue anodized aluminum for a unique appearance. 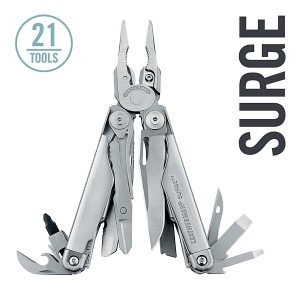 The Surge is one of the big boys and in fact one of Leatherman’s largest models. It’s packed with 21 tools, including the largest pliers in Leatherman’s lineup, 154CM replaceable wire cutters and hard-wire cutters, stranded-wire cutters and an electrical crimper. The multitool also includes two 420HC knives, one serrated and one not, spring-action scissors, and an awl with a thread loop.

Add in a can opener, bottle opener, two files, and screwdrivers, plus more, and you’ve got just about any tool you can imagine. The Surge weighs a whopping 12.5 ounces, and is 4.5” long when closed. It comes in either stainless or black, and includes a nylon and leather sheath. 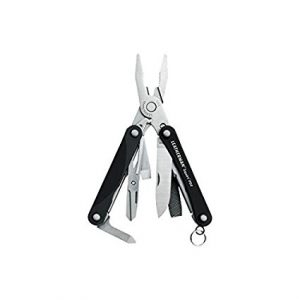 Next up is the Squirt PS4, the tiniest multitool in our line up yet still with a bunch of awesome features. The Squirt PS4 has spring-action needlenose and regular pliers, as well as spring-action wire cutters. The multitool includes a 420HC knife, spring action-scissors, and a combination flat/Phillips screwdriver. There is also a bottle opener, a wood/metal file, and a medium flathead screwdriver.

This tiny multitool weighs only 2 ounces and is 2.25” long closed. The handle scales are 6061-T6 hard-anodized aluminum for durability. It includes a key ring attachment, so you can keep it right with your keys for easy accessibility.

This little guy is extremely handy due to its small size and you’ll barely feel it in your pocket.  It’ll be next to useless in those heavy duty situations but will tackle most of the routine odd jobs around the house without any problems.  Cute yet practical and super affordable. 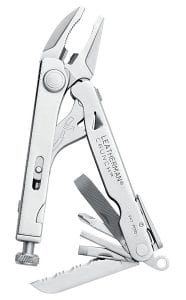 The Crunch multitool is a little different from the rest.  It’s built around locking pliers (vise-grips) which are large enough to grab a 1-inch pipe.  The Crunch has been around for over ten years now and still going strong due to its unique feature set.   It’s roughly about the same size as the popular models like the Wave – with a closed length of 4 inches.

It weighs in pretty light at only 6.9 ounces and features 15 different tools including a 420HC serrated knife, wire cutters and stripper, hex bit driver, bottle opener and a range of screwdrivers.

I really like the Crunch primarily because of the locking pliers and its small size.  Rarely do you find a tool-set like this including vise-grips in such a small package.  Quality engineering and the typical Leatherman fit and feel we’ve come to expect. 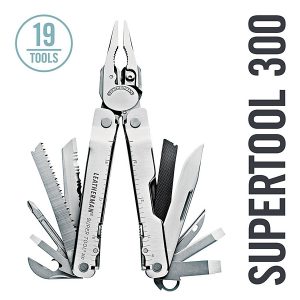 The Super Tool 300 is another big guy but not as chunky as the Surge.  It weighs in at 9.6 ounces, and is 4.5” long when closed. You get 19 tools, including needle-nose and regular pliers, 154CM replaceable wire and hard-wire cutters, as well as stranded-wire cutters and an electrical crimper.

You also get a wire stripper, two 420HC knives (one serrated), a saw, and an awl with thread loop. You also have your wood/metal file, can/bottle opener, and a host of 4 different screwdrivers. Finally, it’s available in either stainless steel or black, and comes with a nylon/leather sheath. 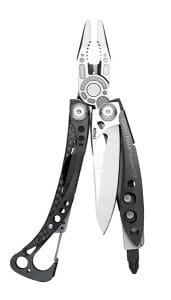 The handles on the Skeletool CX are stainless steel with carbon-fiber handle scales and Tungsten DLC scratch-resistant coating. This baby still weighs in at a mere 5 ounces, includes a belt clip, but still does not ship with a sheath. 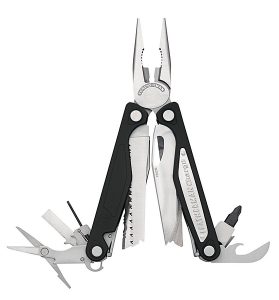 The Charge AL is a slimmed down version of the Charge TTi which is of course a bit cheaper.  It features 17 built-in tools, including scissors that are beveled for extra-close work and are sharp enough to cut through just about anything. The multitool has a 154CM knife and a 420HC serrated knife, as well as both needlenose and regular pliers. For cutting wires, you have hard-wire cutters and stranded wire cutters and a wire stripper.

The Charge AL also includes two files, the bottle/can opener, and both large and small bit drivers plus a few essential bits. The pocket clip and quick-release lanyard ring is replaceable, but the multitool does not come with a sheath. 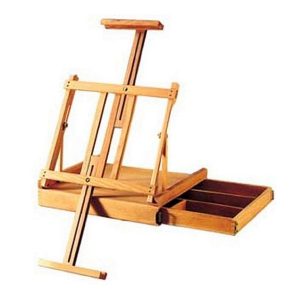 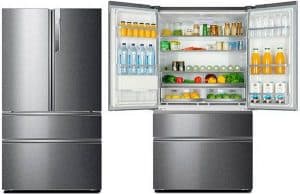